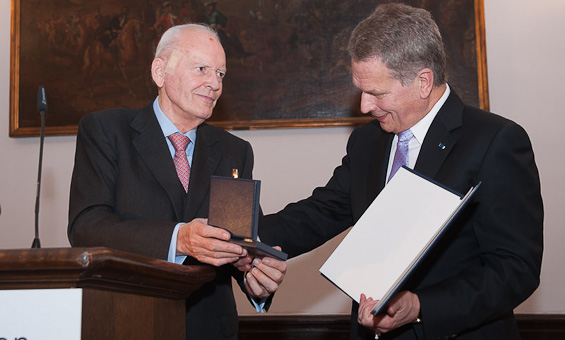 On Sunday 17 November 2013, President of the Republic Sauli Niinistö received the International Prize for economic achievement of the Friedrich-August-von-Hayek-Stiftung, in Freiburg, Germany. The prize-giving speech was given by Horst Köhler, former Federal President of Germany and a previous Managing Director of the IMF.

In his speech, Professor Köhler referred to the encouragement President Niinistö has provided to his countrymen to respond to globalisation’s challenges by grasping the opportunities it offers to grow and benefit as individuals, as a people and as an economy. Earlier, in the list of accomplishments published as reasons for the award, President Niinistö was praised for his firm commitment to balancing the economy and stabilising the public finances in both Finland and the European Economic and Monetary Union, during his period as Minister of Finance in 1996-2003. He was presented with the prize by former Federal President of Germany Roman Herzog.

In his acceptance speech, President Niinistö reminded the audience that Europe’s economic situation was still very fragile. He commented that, in addition to enhancing employment, growth and competitiveness, Europe must end its vicious cycle of debt-dependency by engaging in structural reform. President Niinistö added that politicians now face something of a conundrum: ”While reviving the economy, they must also square up to growing populism and concerns about the associated tremors rippling through our social and democratic institutions. This is not an easy time to be a politician in Europe, but if they make the right decisions now, incumbents will be fondly remembered and perhaps even re-elected,” urged President Niinistö.